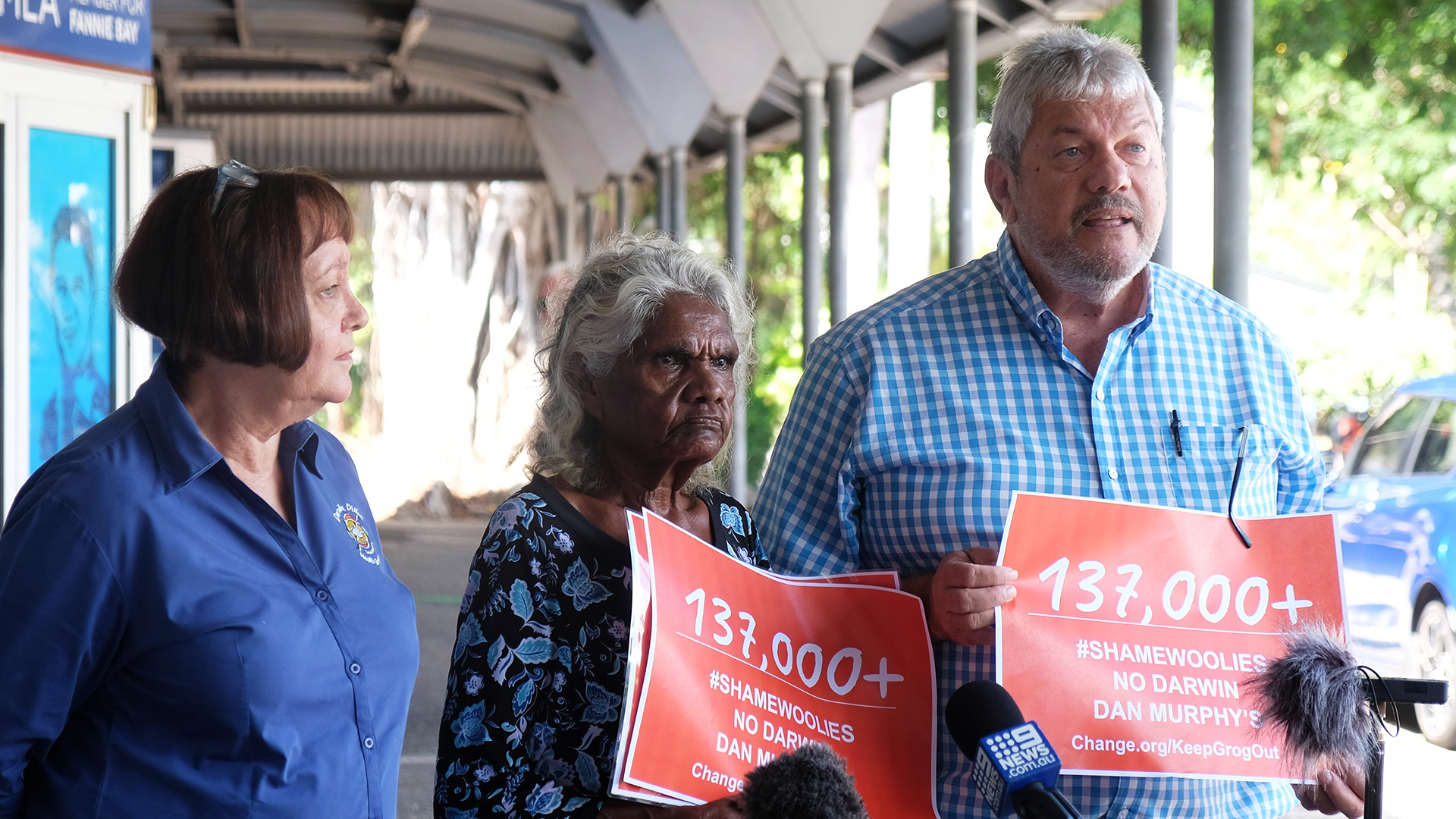 Aboriginal and community leaders are disappointed with today’s decision made by the Northern Territory (NT) Director of Liquor Licensing to green-light Woolworths’ Darwin Dan Murphy’s megastore, which is proposed to be built on the doorstep of three dry Aboriginal communities.

“This is not the outcome we wanted. But in some ways it is the outcome we expected from a process that was stacked against community input and proper process,” said John Paterson, Aboriginal Medical Services Alliance Northern Territory (AMSANT) CEO.

“Instead of listening to the community, instead of accepting the decision of the Independent Liquor Commission, Woolies has just continued to push ahead, doing a deal with the Gunner Government to rewrite the law and lock community voices out of the process,” he said.

A recent change in the law made by the Gunner Government meant the future of the store could be decided by a single public servant, the Director of Liquor Licensing, rather than the Territory’s Independent Liquor Commission, who based on their review of the evidence had rejected the store because of the harm it will cause.

“The Independent Liquor Commission reviewed this store and the evidence. They sent a very clear message to Woolworths: You should not be building this store. The problem is Woolworths didn’t listen. But they can still listen now – they can decide not to proceed with this store,” said Olga Havnen, CEO of Danila Dilba Health Service.

“First and foremost, our position is that this store should not be built. Our opposition to this store is because of the harm alcohol causes in the Northern Territory – Fetal Alcohol Spectrum Disorder, violence, hospitalisations, chronic disease, death.”

“I believe the decision by Woolworths Chair Gordon Cairns and CEO Brad Banducci to aggressively pursue their desired outcome is a good example of corporate wilful blindness. Woolworths and Endeavour Drinks know that serious harms will inevitably follow.”

“This is unconscionable conduct. Juukan Gorge destruction is no different to the inevitable destruction of lives,” she said.

Woolworths has been repeatedly criticised for a lack of proper consultation with local communities. Throughout almost five years of rejections and objections, Woolworths has ignored community voices calling on the company not to build the megastore.

“Woolies and their Board should have engaged and consulted with the community at the start. If they did, there is no way they would have made this unethical decision to put a giant Dan Murphy’s megastore on our doorstep,” said John Paterson, AMSANT CEO.

“They pushed and pushed until they got the answer that they wanted, but we’re telling them there is still time to do the right and honourable thing by listening to our community and stopping this store,” he said.

Community leaders will continue to call on the Woolworths Board to abandon their plans for the development, considering the harm it will cause the local community.

“The people who can still put a stop to this alcohol megastore now are the Directors of the Woolworths Board. We are now calling on them to listen, put the health and safety of the community ahead of profits, and make the ethical decision not to proceed with this store,” said Deborah Di Natale, CEO of the Northern Territory Council of Social Services (NTCOSS).

“Moving the site by one kilometre does not address the significant harms this store will bring as was identified by the Independent Liquor Commission. We simply do not need any more alcohol stores in Darwin and certainly not one of the biggest stores in the country. We’re asking you not to build this store,” she said.

Aboriginal and community groups have vowed to continue to call on Woolworths to abandon their plans to build this store.

“We will continue to oppose this alcohol megastore and call on the Woolworths Board to put the health and wellbeing of our families and communities ahead of their profits,” said John Paterson, CEO, AMSANT.