There has been unprecedented growth in the physical availability of alcohol in Australia over the last 15 years.

The number of liquor licenses and licensed premises has increased dramatically. For example, in Victoria, the number of liquor licenses increased by 120 per cent between 1996 and 2010. Trading hours for alcohol sales, and in particular late night trading, have also increased dramatically in recent decades. This increase in the number and type of outlets, and their trading hours has resulted in alcohol becoming more readily available than it ever has been. In some states and territories, such as the Australian Capital Territory (ACT), alcohol can be sold in supermarkets, alongside groceries and other everyday items.

It is well-established that increases in the availability of alcohol contributes to increases in alcohol-related violence.

In Western Australia (WA), a study concluded that for every 10,000 additional litres of pure alcohol sold at an off-licence liquor outlet, the risk of violence experienced in a residential setting increased by 26 per cent.

An evaluation of 3am close and 1am lockouts (later amended to 3.30am and 1.30am) introduced for all on-licence premises in Newcastle (NSW) in 2008 found that the restrictions resulted in a 37 per cent reduction in night-time alcohol-related assaults with no geographic displacement to the nearby late night district of Hamilton. These positive effects were sustained over time with an evaluation undertaken five years later finding sustained reductions in alcohol-related assaults, with an average of a 21 per cent decrease in assaults per hour.

The NSW Government introduced a similar set of measures in February 2014 to address concerns about alcohol-related violence. The measures included a 3am close and a 1.30am lockout for pubs, clubs and bars in the Sydney Central Business District (CBD) Entertainment precinct, and a 10pm close for take-away alcohol across NSW. According to a recent report released by the NSW Bureau of Crime Statistics and Research, non-domestic assaults had fallen by 32 per cent in Kings Cross and 26 per cent in the Sydney CBD Entertainment precinct since the implementation of the measures.

Decreasing the availability of alcohol, both spatially and temporally, reduces alcohol harms. Governments can reduce the incidence of alcohol harms by: 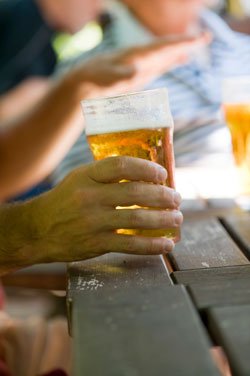 The submission places particular focus on strategies to reduce harm, one of the areas listed for comment within the Review of the Liquor Control Reform Act 1998 consultation paper.

Submission to the Victorian Royal Commission into family violence

FARE makes 17 recommendations to the Royal Commission on how the Victorian Government should work to reduce the incidence of alcohol-related family violence. Key areas for recommended reform include regulating the availability and promotion of alcohol, developing comprehensive and integrated models of care, implementing programs targeted at perpetrators, educating young Victorians, and improving data collection and program evaluations.

Submission to the SA Review of Codes of Practice

This submission was prepared by FARE in response to the South Australia (SA) Review of the the General Code of Practice and Late Night Trading Code of Practice under the Liquor Licensing Act 1997. The document provides 12 recommendations for strengthening the Codes to ensure that they are an effective regulatory tool in reducing the harm caused by alcohol.