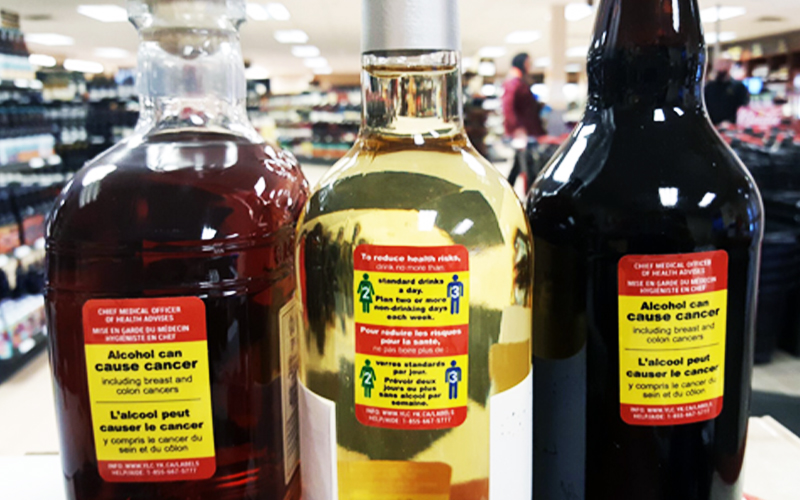 New research out of Canada has found that alcohol warning labels are effective in both raising awareness and changing behaviours.

Those are the findings from a new series of papers published in the international journal – the Journal of Studies on Alcohol and Drugs – that has also documented how the alcohol industry is actively working to stop effective labels from being introduced internationally in countries including Canada and Ireland.

World-first research from the Canadian Institute for Substance Research (CISUR) at the University of Victoria found that well-designed warning labels can reduce alcohol intake, while also raising awareness. Following the introduction of labels, people exposed to the new labels were 10 per cent more likely to recall the causal link between alcohol and cancer, three times more likely to be aware of Canada’s low-risk drinking guidelines, and 50 per cent more likely to remember daily low-risk drinking limits. People in the areas where the label was introduced also bought less alcohol than people in the control areas.

“This new Canadian research is significant because it provides further evidence that effective alcohol warning labels, such as the label proposed by Australia’s own food labelling and safety regulator, can result in fewer children being born with Fetal Alcohol Spectrum Disorders (FASD),” Ms Giorgi said.

Ms Giorgi says the research comes at a critical time; with the alcohol industry’s persistent lobbying having stalled the introduction of an effective pregnancy warning label in Australia for well over a decade, and now threatening to derail its introduction in coming months.

“As long as babies are being born with Fetal Alcohol Spectrum Disorders (FASD), we need to be doing more to prevent this from occurring. Effective health warnings, like the warning recommended by FSANZ, can prevent children being born with lifelong disabilities that come from drinking alcohol while pregnant,” Ms Giorgi said.

Ms Giorgi says every single element of the label developed by FSANZ over two years was chosen for its effectiveness, and says that any changes to appease the alcohol industry would be choosing to create a less effective label.

“With alcohol industry lobbyists fighting hard against this particular pregnancy warning label – the only thing that we can conclude is that they don’t want the community to know about the potential harm of their alcoholic product to babies,” Ms Giorgi said.

The labelling intervention was launched in the liquor store in Whitehorse in late 2017. Approximately 300,000 labels were applied to 98 per cent of alcohol containers during the study period.

Two papers led by study co-lead Erin Hobin, scientist at Public Health Ontario and assistant professor at the University of Toronto’s Dalla Lana School of Public Health, looked at how people retained the labels’ messages. Consumers exposed to the new labels were 10 per cent more likely to recall the causal link between alcohol and cancer, three times more likely to be aware of Canada’s low-risk drinking guidelines, and 50 per cent more likely to remember daily low-risk drinking limits.

An analysis of sales data led by Tim Stockwell, director of CISUR and co-lead of the study and CISUR scientist Jinhui Zhao found that per capita sales of labelled products dropped by 6.6 per cent compared to the products in control sites that didn’t get the new labels.

Canadian alcohol industry lobby groups objected to the study, questioned the government’s authority to place the labels on the containers in the first place, and challenged the link between alcohol and cancer despite decades of scientific evidence.

A decision was made to further delay the introduction of mandatory pregnancy health warning labels on all alcoholic products, following persistent lobbying by the alcohol industry. FSANZ was charged with further review of the proposed mandated label over the following three months to June 2020

The Australian Capital Territory’s (ACT’s) first-ever campaign about the link between alcohol use and cancer is being launched today.